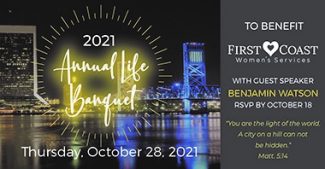 The Life Banquet is a celebration of the hope, healing, and life brought to the lives of new families in need. Sponsors provide valuable monetary support for the event and fundraising for the ministry, allowing First Coast Women’s Services to continue to serve women, men, and families facing unplanned pregnancies.

By the age of 39, Benjamin Watson accomplished the American dream: He played 16 seasons in the NFL, was a team member on the New England Patriots, and scored a championship ring in Super Bowl XXXIX.

One of Watson’s greatest passions in life is to protect the lives of the most defenseless. As one of the most outspoken pro-life voices in media, Watson and his wife Kirsten personally devote their time and money to assist pregnancy resource centers. He has also addressed the March for Life, which takes place every year in Washington, D.C. and has been a regular on Fox News defending Life.

This year, Watson starred in Divided Hearts of America, a moving pro-life film, produced by himself alongside many notable pro-life advocates such as Alveda King, Ben Carson, and Abby Johnson. He is also a member of the Advisory Board with Human Coalition.

Sponsorships opportunities for the annual life banquet are available at a variety of levels. Our sponsors enable us not only to host this event but also to reach more women and families in need.